WestConnex - St Peters Interchange - a catastrophe in the making

The unplanned, uncosted WestConnex project by the Liberals was again subject to debate in the NSW Parliament. The largest public works project in history, all I asked for in an amendment I moved on behalf of a number of MP's was for the government to release planning and strategy documents to the community. The Liberals could not even do that. What are they hiding. As I told Parliament if the St Peters road interchange goes ahead a catastrophe is coming to my electorate that no government will ever be able to fix. This really has to be above politics. It is our future. This is what I told parliament.

Commercialisation of Centennial and Moore Park a disgrace

The commercialisation of Centennial Park and Moore Park by the NSW Liberals is disgraceful. Extorting money from 17 Sydney Schools who can no longer afford to pay these ridiculous charges is quite improper. This open space gifted to the people to be held in trust by Governor Macquarie at the beginning of the 19th Century makes it the quintessential people's park. Building synthetic fields to make more money, gouging money out of children, or building another 60,000 seat stadium, as well as retaining the Sydney Cricket Ground and Allianz Stadium is a breach of Governor Macquarie's gift to us all. This is what I told parliament last week.
Posted by Ron Hoenig at 15:28 No comments:

So many local Rosebery residents came to Turruwul Park today to meet with their local NSW Labor representatives; Tanya Plibersek,  Federal Member for Sydney and Deputy Leader of the Opposition, Councillor Linda Scott of the City of Sydney Council, and I. A sausage sizzle organised by Rosebery ALP Branch made it such a great day.

It was a pleasure to join Botany Bay City Council and Michael Daley MP for a morning tea to say thank you to some of our local volunteers. It was a privilege to be amongst these very special people who do so much to assist others in our community. 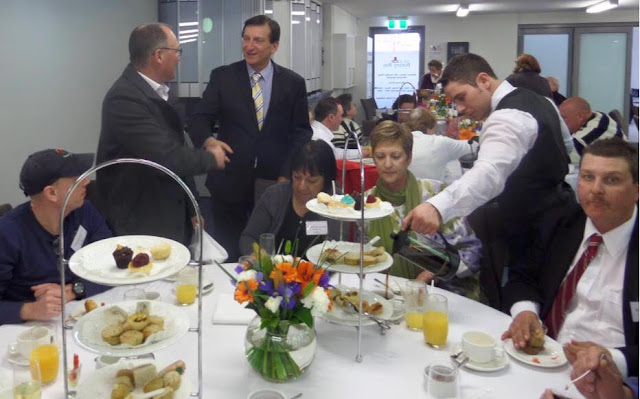 Launch of Brian Injury Awareness Week at Our Big Kitchen

I was delighted to attend the launch of Brain Injury Awareness Week 2015 that was launched in NSW jointly by Brain Injury and Our Big Kitchen.

In 2015 the week turns its attentions to a neglected minority of survivors of traumatic brain injury, Particularly women - for whom assault is a much more common cause of brain injury than for men. In Australia, 1 woman is killed by her current or former partner every week.

What happens to those who survive?

The launch heard from Dr Charles Teo AM, neurosurgeon and Director of the Centre for Minimally Invasive Neurosurgery at Price of Wales Hospital, Nick Rushworth, Executive Officer of Brain Injury Australia, Rabbi Dovid Slavin, himself a survivor and Rebecca Sciroli a survivor.

Rebecca such an impressive young lady told of her horrendous attack by her step father with a claw hammer to the head and her long road to survival and her daily fight against spasticity.

One in three woman who present with head injury in Australia are victims of Domestic Violence. As Dr Teo told the launch; any injury to the brain is never repaired. The brain is the only organ that cannot repair itself. Domestic Violence is just the most insidious form of head injury. Society has been far too slow in addressing this violent and aggressive behaviour in the home. So much of this injury is unreported. Early intervention and access to support services and government funding is urgently required.
Posted by Ron Hoenig at 21:10 No comments: