Recently in Parliament I paid tribute to Rodger Dowsett, who after 44 years of dedicated service is retiring from Botany Bay City Council as the Director of Planning and Assessment.

During my time as Mayor, Rodger was the builder for many of my ideas for our great city. He has overseen the transformation of our city and his dedication to this vision will benefit residents for generations to come.

It was an honour to be able to personally thank Rodger for his hard work over so many years and recognise how his contribution to the city of Botany Bay is so significant. I wish Rodger the very best on his retirement.

I have set out below in full what I told parliament.

Mr RON HOENIG (Heffron) [7.57 p.m.]: Today I pay tribute to Mr Rodger Dowsett who this month will retire from Botany Bay City Council as a director after 44 years of service. Mr Dowsett began his career as a junior health inspector in 1970 and leaves as the Director of Planning and Assessment. He has literally grown up at Botany Bay City Council. When I was elected as mayor in 1981 Mr Dowsett was a junior municipal health surveyor. He rose through the council's service from a health and building inspector to manager of those services and then to director of planning. His elevation over the years has been due to his immense talent, ability, integrity and hard work.
Planning is perhaps the major local government function that can impact upon a council area for a century. The transformation of the city of Botany Bay from a land of stinking tanneries, polluting toxic industries and hazardous industries to the greenery of the suburbs that I left on departing the office of mayor in 2012 was attributable to planning policy. I might have been the architect of that planning policy, but Rodger Dowsett was the builder. As the builder Mr Dowsett has overseen the city's transformation from poor-quality industrial to high-quality residential development. One example of many is the transformation of areas such as William Street, Botany, from warehousing and semi-trailers to quality townhouses, villas, federation housing and a leafy environment, which is a remarkable example of what planning policy can achieve.
The transformation of the Mascot station precinct from an old industrial space into a well-designed, high-quality and high-density living area is also remarkable and can be attributed to Mr Dowsett's remarkable effecting of planning policy. In my 30 years as mayor, success in implementing these massive changes involved consultation with and the support of the community, which can only occur through genuine consultation. You cannot achieve significant change without taking the community along with you. It was Mr Dowsett who introduced community consultation committees to ensure that the council took the community with them in relation to the continued changes in the City of Botany Bay as it moved from an industrial area to residential development.
As if Mr Dowsett's contribution to planning and the environment were not enough, during my time as mayor I constantly restructured the council's activities to allocate even greater responsibility to Mr Dowsett. I needed Mr Dowsett's dedication and capacity to succeed on behalf of the community. I provided him initially with responsibility for outdoor staff and then parks and gardens and then asked him to implement significant sporting and community infrastructure. Hensley Athletic Field is a testament to Mr Dowsett's vision. With a Federal grant, an archaic athletic field was transformed into a modern athletics facility with synthetic grass soccer fields. It provides endless sporting opportunities for the community. Hensley Athletic Field will remain for future generations a monument to Mr Dowsett's achievement, particularly for junior athletics and football in the City of Botany Bay.
Council's then general manager constantly warned me that I was overloading Mr Dowsett. However, upon my inquiries Mr Dowsett refused to indicate that he was overloaded or overburdened, such was his commitment and dedication to the council. He leaves the council's service as one of the most professional and competent planners I have ever come across. He also leaves council as a dear friend to many of the City of Botany Bay Council staff, who greatly admire and respect him on both a personal and a professional level. Roger Dowsett is a planner, building inspector and dedicated director who is passionate about his work and takes the quality of his work very seriously. He leaves the service of the council knowing that most of his life has been dedicated to significantly improving the lives of the city's citizens in every capacity and in every way. I wish him, his wife, his two daughters and his grandchildren well upon his retirement. On behalf of the Parliament of New South Wales, I thank Mr Dowsett for his immense contribution to the City of Botany Bay. 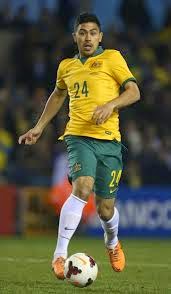 This month in parliament I was able to pay tribute to Massimo Luongo, a young local Heffron resident from Waterloo, who was selected as a member of the Socceroo's squad for the 2014 FIFA World Cup in Brazil.

I have known Massimo and his family since he was a young boy playing football on local parks with my kids. Now having represented his country, and recently scoring for Swindon Town on the opening weekend of the English Football League season we all hope to see great things from this very talented midfielder.

Mass is a great model for young footballers. It shows young children that it is not just talent. It is dedication. It is hard work. It is perseverance, and it is sacrifice by an entire family.

Mass, I know has brought great pride to his family, his local community and his nation. Hansard containing what I said in parliament is here: http://parliament.nsw.gov.au/prod/parlment/hansart.nsf/V3Key/LA20140806019?open&refNavID=HA8_1

Saturday the Marrickville Community lost its champion, the Labor Party lost one of its local heroes, and I lost a loyal friend.

Cr Emanuel Tsardoulias or Manny as he was known to many of us has been seriously ill in recent times. He has served the Marrickville community with distinction as a councillor and Deputy Mayor. I knew him well from my local government days and served with him at the Southern Sydney Regional Organisation of Councils and the Local Government Association.

Manny was a warm, generous, loyal and dedicated human being. I will miss him. The Labor Party will miss him and his community will miss him. I extend to Manny's family, his wife and two children my deepest sympathy. Vale Cr Emanuel Tsardoulias.
Posted by Ron Hoenig at 16:26 No comments:

I was delighted to attend the Botany Historical Trust's "Commemorating the Centenary of the Outbreak of World War I" to listen to such an impressive keynote address by Bob Carr.

I was delighted to joint with Matt Thistlethwaite MP, Mayor Ben Keneally, Botany Bay City councillors, Her Honour Magistrate Jacquie Milledge, Anne Slattery the Trust President, Trust members and residents. Lest We Forget.
Posted by Ron Hoenig at 21:42 No comments:

"Gonski" is not just a name

"Gonski" is not just a name. It is not just politics. It is about children and their future. It is about secure funding to make sure children do not miss out and get the helping hand they need at times. Children are not "economic units". Children are not widgets. It is something that the Liberals just don't understand.Reading attached brochure really brings it home to you.
Posted by Ron Hoenig at 21:32 No comments: