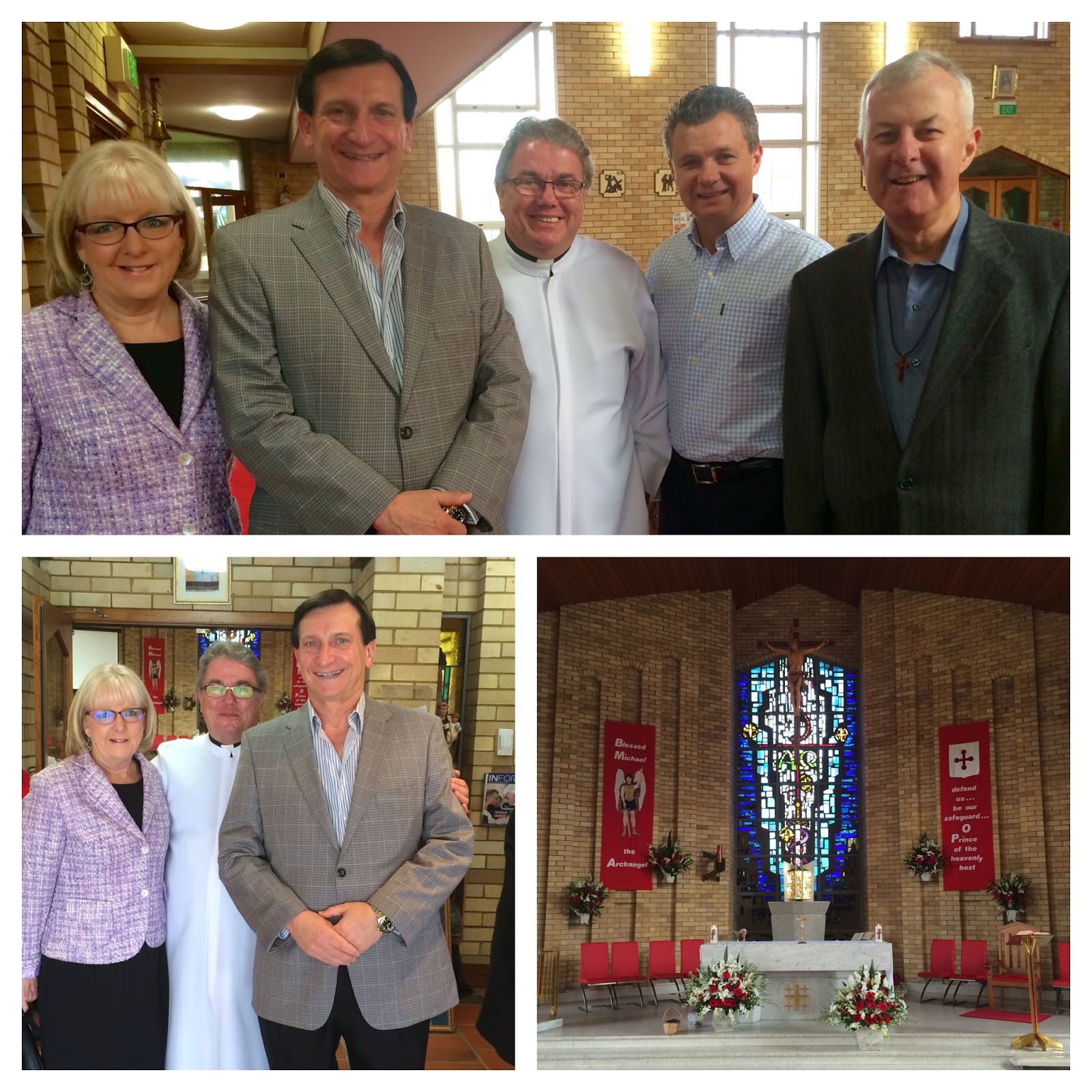 My wife Christine and I were delighted to join Matt Thistlethwaite MP at St Michael's Catholic Church Daceyville which held their International Feast Day Celebrations.

Todays celebrations incorporated the 50th Anniversary of Ordination to the Priesthood of Father Anthony Simari (retired 17 July 2014 and the 60th Birthday of Farther Jerzy Chrzczonowicz, Parish Priest. St Michael's Daceyville is a wonderful Parish with a community that has alway warmly welcomed me for very many years.
Posted by Ron Hoenig at 17:42 No comments:

'Will somebody not rid me of this troublesome Lord Mayor?' - Liberals are just desperate

Desperation is the word to describe the attempts by the Liberal/National Parties this week to try and silence me of one of their most embarrassing attempts to rort the Sydney City Council voting system to try and rid Sydney City of its popularly elected Lord Mayor, Clover Moore.

In 2012 these desperadoes changed the Local Government law to stop any Member of the NSW Parliament from being elected to the council. Certain they were that the Lord Mayor, who was also the state Member for Sydney would opt to resign the Lord Mayoralty in the hope to elect a Liberal as Lord Mayor.

To their utter suprise Clover Moore was elected as Lord Mayor of Sydney overwhelmingly and resigned from the NSW Parliament.

Then to their utter suprise, thinking that the reactionary forces could win the seat of Sydney vacated by Cr. Moore, Alex Greenwich support ed by Cr Moore was easily elected.

A government with any brains would have woken up that they were outsmarted, not by Clover Moore, but by democracy, when the people overwhelming rejected the Liberals in two elections so convincingly. No this mob. Now they have tried to rort the election system by forcing all businesses to vote at council elections, fine them if they do not go on the electorate roll, and fine them if they do not vote. On top of that any business will get 2 votes. A resident will only get 1 vote.

So desperate and obvious were they, I can do no better than quote the ABC's respected psephologist when he said; 'Will somebody not rid me of this troublesome Lord Mayor?' on 5 September 2014. He said in effect that the law was directed by malice towards Cr. Moore.

I have included below the Handsard of my contribution, which includes the Deputy Speaker trying to silence me as the the Liberals motivation. These Liberals and Nationals should not only be ashamed of themselves, they should be embarrassed. The edited video of my speech is here http://youtu.be/ru21eK4CAyU

The Baird Liberal Government is heading down the path of council amalgamations and rorting Sydney City Council elections systems to replace its popularly elected Lord Mayor. The Liberals are desperate to distract attention away from a government mired in corruption allegations. The tragedy for the people of NSW is the state is now ungovernable by a Premier who is like a rabbit in the spotlight.

When government rush out major policy announcements when they are in trouble it is a receipe for a disaster that will befall people. The link to speech to parliament about the laughable "Fit for the Future" policy is here https://www.youtube.com/watch?v=PMybNaKhGFk
Posted by Ron Hoenig at 19:17 No comments: 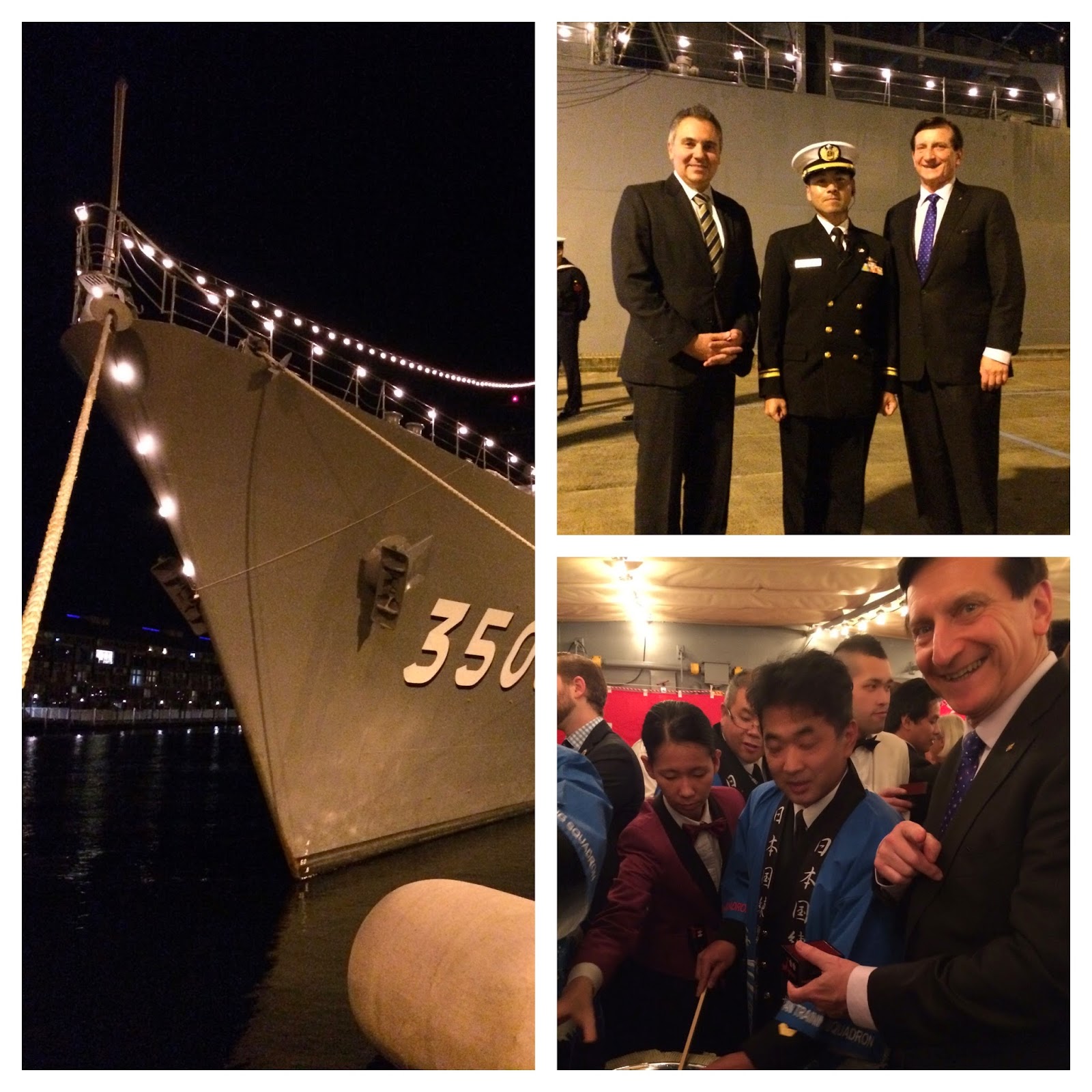 It was a very impressive reception that I attended this evening in my capacity as Shadow Minister for Ports together with Guy Zangari Member for Fairfield at the invitation of the Consul-General of Japan and Rear Admiral Hideki Yuasa Commanding Officer of the Japanese Training Squadron on board the JS Kashima berthed at Garden Island.

It was a very impressive evening and marked one of many for the Japanese Training Squadron who have embarked on a 156 day journey around the Pacific Rim.

The ships are part of the Japanese Maritime Self-Defence Force Training Squadron. Since 1956, the Squadron has been conducting annual overseas training cruises to develop the knowledge and skills of Junior Officers, who have completed the General Officer Midshipman’s Course at the Japanese Maritime Self-Defence Force candidate school.
Posted by Ron Hoenig at 19:05 No comments:

Secretary-General of the Israeli Labour Party meets with NSW Labor

I was a pleasure to join NSW Labor Leader John Robertson and my Labor parliamentary colleagues, The Hon. Greg Donnelly, The Hon. Sophie Cotsis, The Hon. Luke Foley, The Hon. Carmel Tebbutt, and The Hon. Walt Secord in meeting at Parliament House today the Deputy Speaker of the Israel Knesset and Secretary General of the Israel Labor Party Yehiel (Hilik) Bar M.K.

Mr Bar thought it important to meet with his Australian Counterparts. It was fascinating hearing the approach advocated by the Israel Labor Opposition on the way forward for peace in the Middle East and how the Israel Opposition would move forward with a two state solution. He told us that to reach a two-state solution, he said, concessions will need to be made, and that requires the right leadership on both sides. “The two leaders right now [Mahmoud Abbas and Benjamin Netanyahu] have a lot of problems that prevent them from making the necessary concessions,” he said.
Posted by Ron Hoenig at 18:53 No comments: